How did the harvesting campaign develop in Minsk region and will there be enough grain for livestock enterprises? 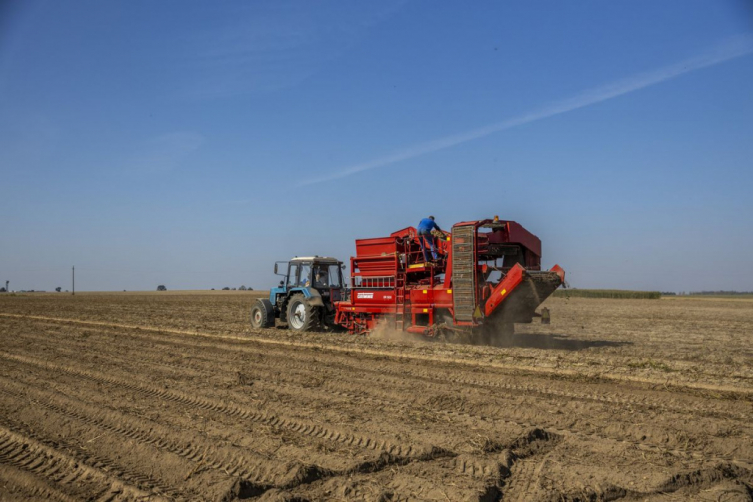 How did the current harvest campaign develop? What crops are most profitable? Will livestock enterprises be provided with grain? Mlyn.BY spoke about this and many other things by the first deputy chairman of Minsk Region Executive Committee Sergei Levkovich.

- On September 25, the agrarians of Minsk region will celebrate the regional "Dazhynki". With what results did the region come to the holiday?

- This year there has been a tendency towards a decrease in the volume of the harvest relative to the level of the last year. In the spring, due to frosts, 31 thousand hectares of winter crops died, and this is almost 10 percent of the total area under crops. Also, the cold spring did not contribute to the intensive development of grain crops and did not allow sowing spring crops according to all the requirements of the technology. The soil was cold and the seedlings were late. The abnormally hot summer also had a negative impact.

In turn, workers in the agricultural sector carried out a lot of work to form the harvest of the current year: this is the accumulation of mineral fertilizers, and the timely care of crops. But, unfortunately, the grain shortfall in the region amounted to more than 300 thousand tons, or about 17%.

There is no disaster in this. Over 1 million 630 thousand tons of grain have already been harvested. In addition, 250 thousand tons of rapeseed were harvested. The harvesting of legumes and buckwheat continues. Ahead of us is the harvesting of corn for grain. We plan to collect about 400 thousand tons. The state order for grain in the region has been fulfilled by 100 percent. This suggests that there will be bread in the country. And it will be at an affordable price.

- What tasks does the agro-industrial complex of the region set for itself?

- The main task is to increase the economic efficiency of agricultural production through the formation of fair prices for it, as well as to reduce the cost of production of crop and livestock products.

Today, work is underway to provide the main enterprises - producers of poultry meat, eggs and pork with the required volume of concentrated feed.

I think that this year we will get a good harvest of corn for grain. And taking into account the availability of grain in the agricultural organizations of the region, as well as the created reserves, the production of livestock products will be provided in the volumes planned by the enterprises.

- What work has been done to prepare for the harvest?

- Every year, purposeful work is carried out in the region to purchase agricultural equipment. This year, the organizations of Minsk region received more than 200 units of various agricultural machinery. 51 of them are grain harvesters.

Also this year, construction of 28 new grain drying complexes is underway. For the harvesting of corn, the bulk of them will be put into operation. And this is a very serious help in growing corn for grain. We see a certain benefit in this culture. Corn is a valuable feed that is used in almost all types of livestock production. It is also corn silage, without which it is difficult to imagine dairy farming today.

- What agricultural crops can be called promising today?

Rapeseed shows high growth rates of economic efficiency. For a number of agricultural organizations, the profitability of growing this crop reaches 40 percent or more. For the second year in a row, we are expanding the area for rapeseed.

We are also expanding the crops of winter barley. The culture is widely in demand in animal husbandry for all groups of livestock and poultry. This year we plan to sow more than 20 thousand hectares of winter barley. In the hands of professionals, it gives a good yield - 60 centners per hectare and more.

Despite not entirely favorable external factors, we pay close attention to the sale of the harvest. This year, we tried to withstand the seasonal drop in prices for feed and food grains, both in neighboring countries and in the domestic market. The task is to sell the harvested crop at the most favorable prices for agricultural producers.

- What about grain prices?

- Already today the price of grain shows a constant growth both on the external and internal markets. In this regard, we need to minimize sales during the harvesting period (when the price of grain, as a rule, is minimal), and maximally preserve the harvest in order to sell it throughout the year. There are plans to build new grain storage facilities in the area.

- In Minsk region, the number of thousand-strong crews is growing, as well as farms that have overcome the high yield per hectare. Who has shown good results in the grain field this year?

In recent years, the Kopyl district has been demonstrating good rates and dynamics of development. Slutsk region shows good results. Among the best are OJSC Vitko-Agro, state farm Rachkovichi, OJSC Kozlovichi-Agro. OJSC "Kukhchitsy" of Kletsk district has a decent result, both in the production of crop and livestock products.

SEC Agrokombinat Snov and OJSC Novaya Zhizn in Nesvizh district, Kletsk branch of the Slutsk cheese-making plant, the agricultural enterprise Voskhod in Minsk region, the Pravda-Agro branch of OJSC Agrokombinat Dzerzhinsky and many others distinguished themselves with high grain yield.

More than 54 thousand people work in the agriculture of the Minsk region. A quarter of the country's agricultural products are formed by these people. And it's important to maintain their well-being. This year, we have taken a good pace in terms of wage growth, and in terms of growth in the revenue of agricultural organizations. For seven months, revenue grew by almost 18 percent, while the volume of gross output grew by 102.3 percent. Profit increased by 57 million rubles. The level of wages is growing almost proportionally.

I congratulate everyone on the harvest holiday "Dazhynki". I wish all workers in the agricultural sector good health, success, prosperity, so that peace and tranquility reign in every family that works in the countryside.