Pothole repairs cannot solve the problem - A. Turchin held a reception of citizens 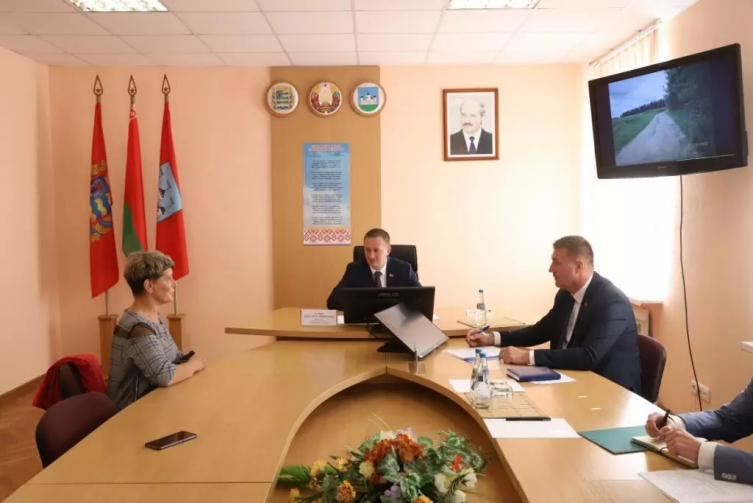 The problematic issues of the inhabitants of Myadel district were considered today, on July 20, by the chairman of Minsk Regional Executive Committee Alexander Turchin. The head of the region held a personal reception of citizens. One of the first to come to him was Tatyana Yaroshevich from Parubki. The woman drew attention to the most pressing and urgent problem - bad roads, Minskskaya Pravda reports.

According to the applicant, the access to the rural houses is carried out along the dirt road of Kirov Street and along the agricultural land along the forest. As Alexander Pranovich, chairman of Myadel District Executive Committee, assured, the road that runs along Kirov Street has already been graded by specialists, and this work will continue.

— However, this will be the only comfortable entrance to the village, — the chairman of the district executive committee noted.

— In any case, you need to save two races, — said Alexander Turchin. — As for the road along Kirova Street, if gravel is not enough for you, you can partially pave at your own expense. Talk to the villagers, if they are ready to invest financially, we will make asphalt, we will plan work for the next year. We are ready to support your initiative.

With a similar road problem, Valentina Mekhovich and Vasily Bosko from the village of Shikovichi came to the governor. According to Valentina Vasilievna, once in their village Shikovichi, an asphalt road was laid along the main street. People lived and, as they say, did not know problems. But everything has its own lifespan — so the village road has turned into solid pits and potholes.

The woman assures: in 2018, the villagers collected signatures, asked the local authorities to put the problematic road in order. They were told that the overhaul was scheduled for the end of 2018 - the beginning of 2019. But things, as they say, are still there...

As noted by Viktor Ragussky, General Director of the Municipal Unitary Enterprise "Minskobldorstroy", patching of the indicated road is carried out on average 2-3 times a year by the jet-injection method - as the newly formed patching occurs. The last time Minskobldorstroy specialists performed patching was at the beginning of July.

— The road itself is a dead end, located at the end of the village, — Viktor Ragussky answered. — I don’t see any point in making the central road in Shikovichi in asphalt: there are bottlenecks there, and if you try to get there, you will have to solve the issue of drainage. Which will be very expensive.

— Sometimes it really makes no sense to do forever patching. In places where there are solid pits, you can put a continuous layer of asphalt, — suggested Alexander Turchin. — It doesn't matter, we are talking about 200 or 300 meters.