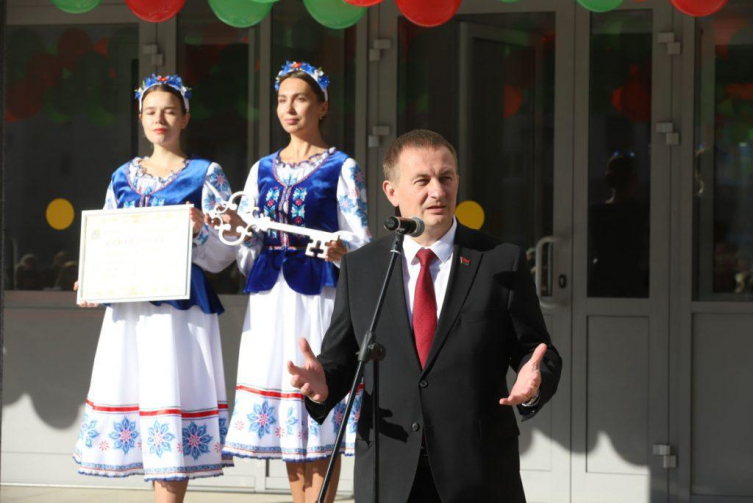 A stylish modern school in the new northwestern neighborhood of the satellite city opened for the first time on September 1 for more than a thousand children. Chairman of Minsk Regional Executive Committee Alexander Turchin came to congratulate students, teachers and parents, Minskaya Pravda reports.

— In the magnificent city of Smolevichi, which is now actively developing, a new school has been built for the first time in the last 30 years. A new kindergarten was commissioned last year, and a road has already been built. This year we will open a new preschool institution and start building a polyclinic. On this day, I would like to wish all of us good health, success and a peaceful clear sky over our heads today, too,— Alexander Turchin said at the opening.

The head of Minsk region congratulated the students and teachers on the housewarming and presented a certificate for 10,000 rubles to the director of the school, Marina Merkul.

There is also a hall for choreography, workshops for labor training lessons (one for boys and two - sewing and cooking - for girls).

The very unusual is the own security center of the Ministry of Emergencies.

In the Year of Historical Memory, the exposition in the museum room is dedicated to the patriotic glory of Smolevichi district.

The new educational institution in the satellite city has already been called the school of the new generation. And the motto with which teachers and students will live confirms this: “The unity of all and the uniqueness of each,” he says. This means that here, along with academic subjects, great attention will be paid to sports and artistic development, and the upbringing of spiritual values. 84 teachers will lead children along the road of knowledge.

As for Smolevichi, I would like to say that everything will be ready in the satellite city in the next two years. Here and now there is already almost everything for a comfortable life. Look at what park, how the embankment is equipped, - said the head of the Minsk region.