Senator: You have to tell people more about the work done at the local level 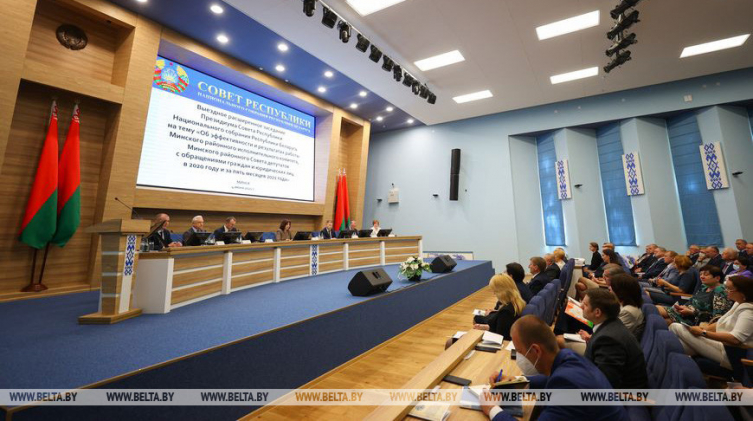 It is necessary to better inform people about the work being done and problems being resolved at the local level. There will be fewer questions and fewer speculations then. Chairwoman of the Council of the Republic of the National Assembly of Belarus Natalya Kochanova made the statement during an expanded-participation offsite session of the Council of the Republic's Presidium, BelTA has learned. The session took place on 4 June to discuss how well the Minsk District Executive Committee and the Minsk District Council of Deputies work with queries of individuals and corporations.

At the beginning of the session Natalya Kochanova explained that Minsk District had been selected because it is the largest one in Minsk Oblast and has certain peculiarities due to its proximity to the capital. The day before Natalya Kochanova and other senators had met with people in various rural councils and had made sure that municipal authorities can and should handle about 70% of the questions and complaints submitted by citizens. She said she had liked the meeting because some of the people had come forward with proposals and ideas.

According to Natalya Kochanova, interests of the individual should top everything else. It is necessary to work with people, know how to listen to people, and see their needs. The successful work of any executive depends on it, the senator stressed. The attitude of people to the government system as a whole depends on how citizens' questions and complaints are handled at the local level, she said.

Members of both chambers of the Belarusian parliament, representatives of the Minsk Oblast Council of Deputies, and heads of enterprises were also invited to attend the session for the sake of ensuring the effective handling of citizens' questions and complaints. Natalya Kochanova encouraged those present to share proposals regarding the amendment of the law on citizens' queries and other initiatives. A number of proposals were put forward.

For instance, it is inadvisable to install deferrization stations in small villages in order to resolve the problem of quality of drinking water. But deferrization devices, which can be installed in wells, have already been developed. They have to go through the certification process. “Certainly, if it helps resolve the problem, we should help the developers implement this manufacturing project,” Natalya Kochanova said.

On the whole, the head of the upper chamber of the Belarusian parliament upholds the view that deputies, who are closest to people, should come up with more initiatives. “The deputy corps should play a more prominent role in handling citizens' questions and complaints,” she said.

In 2020 the Minsk District Executive Committee received a total of 5,146 questions and complaints from citizens (17% up from 2019) and 7,119 questions and complaints from corporations (4% up). The 20% increase in queries sent to the economy office of the Minsk District Executive Committee was caused by the enforcement of Belarus president decree No.143 on support for the economy. Legal persons and self-employed businessmen asked for preferences for paying the real estate tax and the land tax.

According to Chairman of the Minsk District Executive Committee Vladimir Yurgevich, the number of digital queries increased. “Queries were sent by regular mail probably by those, who do have Internet access or do not use the Web,” he added.

According to Natalya Kochanova, the fact that citizens keep sending queries regardless of how well the authorities handle them is not a malfunction in the system. “It is life. People will keep contacting the authorities about various matters. It is unavoidable,” she is convinced. “Our job is to promptly and effectively address the incoming questions at the local level.”

Natalya Kochanova believes that a lot had already been done for the sake of comfortable life of the people but it is not always obvious. “It is necessary to work very precisely with people, explain, better inform them about what is being done in their area with regard to beautification, housing repairs, the operation of the healthcare system and the education system. The better informed people will be, the fewer questions and speculations they will have,” she said.