“We have done the impossible, but we need a little more” - A. Lukashenko assessed the economic results of Minsk region 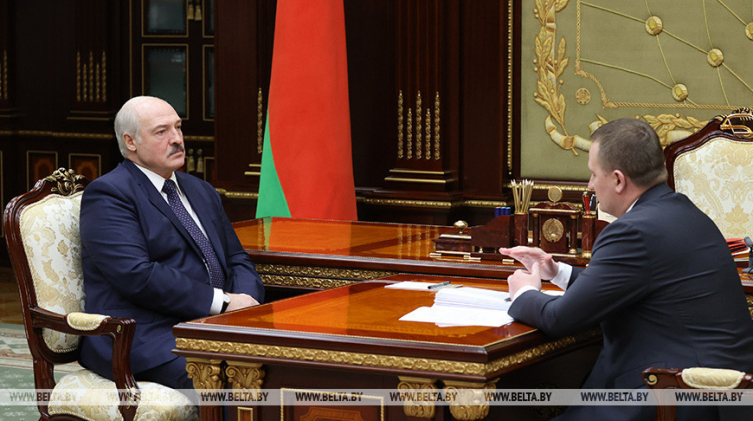 On December 17, President of Belarus Alexander Lukashenko received the chairman of Minsk Regional Executive Committee Alexander Turchin with a report. Economic indicators and the situation with the coronavirus - these were the main topics. By the way, the meeting itself can be called somewhat symbolic: a year ago, Alexander Turchin was appointed head of the central region, and the first results can already be summed up.

Minsk region occupies a significant place in the economic development of the country, therefore the top leadership of Belarus always pays special attention to it. It is no coincidence that she has a dominant position in the president's schedule: in the last year alone, the head of state has visited her 14 times.

Alexander Turchin reported to the head of state that according to preliminary data, for 11 months of this year the gross regional product of the region was fixed at 99.9%. “This figure seems to be high, but offensive: they fell short of 0.1% to 100%. Nevertheless, at the beginning of the year we had 91% of the GRP, and now it is 99.9%, that is, during this time the region has added. We cautiously predict that we should reach the level of last year by the end of the year, ”said the chairman of Minsk Oblast Executive Committee.

“You do not reach one tenth of a percent ... But we still have December. It seems to be not bad. But, as an economist, you understand that we need a result, because we cannot hope that we will have a good next year. You see what is happening around us. Therefore, we will consider that we have done the impossible, but it would be necessary a little more, ”the president replied.

Speaking about the situation with the coranavirus, Alexander Turchin said that the Minsk region, as it is fashionable to say nowadays, has reached a plateau. In other words, the situation has stabilized over the past couple of weeks.

“There is no increase in pneumonia, and in terms of detected cases, we are approximately at the same level: no growth, no decline,” Alexander Turchin informed the head of state.

After the meeting, the chairman of Minsk Regional Executive Committee shared preliminary forecasts with the journalists. According to him, the situation with the coronavirus will remain so until the end of January.

“We will be in a consistently difficult situation. In fact, there are a lot of patients, but the health care system of Minsk region successfully copes with this, ”the head of the region emphasized.

As for the results of the regional economy this year, Alexander Turchin said that now in the Minsk region they are trying to compensate for the decline in industrial production in order to still reach the last year's gross regional product. Particular attention was focused on three areas - construction, agriculture and retail. It was they who showed growth this year, making it possible to compensate for the backlog of industrial enterprises.

“Both the joy and misfortune of the Minsk region is the presence of BELAZ and Belaruskali on its territory. It is good to report success when both one and the other are doing well. Today BELAZ, due to objective reasons, is at a low level, about 40% to the level of the previous year. But, nevertheless, the region gives a result: from 91% (gross regional product. - Editor's note) in January, we grew to 99.9% in 11 months, the industry added 18% (from 80% in January to 98 , 4% for 11 months of the year). This is the strategy that we adhere to, when the failures of large industrial enterprises must be compensated for by other types of economic activity, "explained Alexander Turchin.

The second giant of the Minsk region, the enterprise "Belaruskali", on the contrary, is gaining momentum and is approaching the last year's result, added the head of the central region. Perhaps the previous indicators will even be overtaken.

But in order to reduce risks, it is important to develop a balanced economy. The state of affairs in the entire region should not depend on one or two enterprises, Alexander Turchin is convinced.

“Everything should develop evenly,” stressed the chairman of Minsk Oblast Executive Committee. - There should be no dependence on one enterprise: when it works well - orders, when it is bad - sorry, you have to leave work.

There should be uniformity in the development of regions, Alexander Turchin added. Here Minsk region still has something to work on - the authorities do not deny this.

Of course, Starye Dorogi district will hardly be able to catch up with Soligorsk, where Belaruskali is based, in terms of its economic indicators. But this does not mean that the level of income of the population there should be much lower.

“In terms of income, wages (for me, these are the most important criteria for assessing development), we should be approximately the same, there should not be a big gap,” said the chairman of Minsk Regional Executive Committee, although he admitted that there is such a gap at present.

However, against the background of a decrease in the performance of the main enterprises in Zhodino and Soligorsk, those regions that had previously lagged behind in terms of wages rose significantly. So, according to Alexander Turchin, in the region for 4 months, starting from July, the level of wages in agriculture exceeded 1,000 rubles.

“For many regions, agriculture is a defining economic activity. For example, in Kopyl 40% of those employed in the economy work in agriculture. And the efficient operation of the industry is one of the main keys to the successful development of the region, including the level of income of the population. The normal level of incomes of the population stimulates domestic demand and, as a result, the development of regions, ”summed up the chairman of Minsk Oblast Executive Committee.