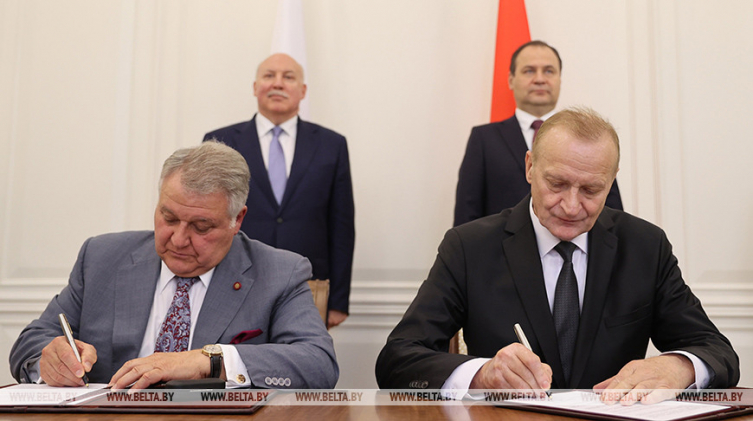 The roadmap contains over 40 events and projects, including those relating to nuclear energy, genetic research, nuclear medicine, the development of unmanned aerial vehicles, and other areas. Vladimir Gusakov said: “Cooperation with the Kurchatov Institute is of great interest for us. I am talking not only about nuclear research and nuclear energy. The institute specializes in a number of areas (materials science, genome technologies, healthcare, agricultural genetics) and expands its scope of research all the time. Today we've signed a roadmap that opens up broader horizons for major joint projects.”

Mikhail Kovalchuk pointed out that very powerful projects relating to a new research infrastructure based on powerful installations – megascience facilities – are being launched now. “Such a program has been launched in Russia. This infrastructure has to become the world's best within 5-7 years. This is why taking into account Belarus' potential it seems very important to recreate the common scientific and research space within the framework of the Union State of Belarus and Russia. With this in mind we've signed the roadmap with the head of the National Academy of Sciences of Belarus today,” he said.

In his words, opening a branch of the Kurchatov Institute at premises of the National Academy of Sciences of Belarus has been suggested. Opening a Belarusian branch of the Moscow Engineering Physics Institute (MEPhI) is another proposal. “Apart from that, we've agreed we are going to draft an intergovernmental agreement on Belarus' participation in the international center based on the PIK reactor in Gatchina near St Petersburg,” the Kurchatov Institute president added.

The Russian national research center Kurchatov Institute is one of the world's top research centers. In the 20th century it was instrumental to national security and the development of strategic areas, including the development and creation of nuclear weapons, nuclear-driven underwater and surface fleets, nuclear energy industry. At present the Kurchatov Institute boasts a unique research infrastructure. It carries out research and development in a broad range of areas of modern science and technology, including power engineering, convergent NBICS technologies, particle physics, high-tech healthcare, and information technologies.