Lukashenko: Constitution of Belarus is a symbol of people's free, peaceful and stable life 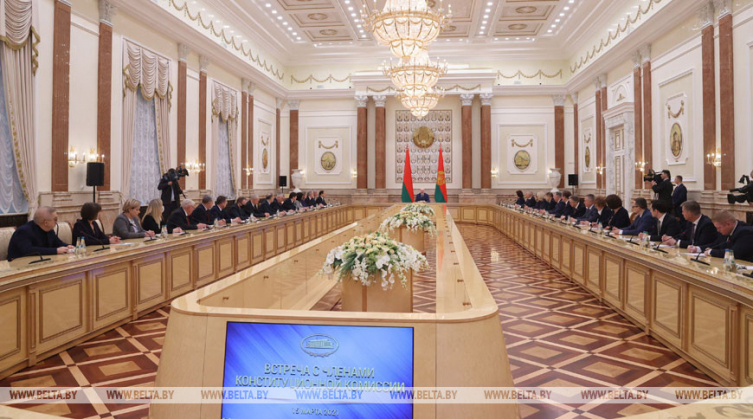 The Constitution of Belarus, adopted 27 years ago, has become a symbol of a new era - a free, peaceful and stable life of the Belarusian people, Belarus President Aleksandr Lukashenko said as he met with members of the Constitutional Commission on 15 March, BelTA has learned.

Among the attendees of the meeting were the country's top officials, members of the House of Representatives and the Council of the Republic, representatives of local government, real and financial sectors of the economy, public associations, science and education, culture and sport.

Aleksandr Lukashenko said that the decision to set up the Constitutional Commission was made at the 6th Belarusian People's Congress. According to him, it is noteworthy that it starts its work as the country celebrates Constitution Day. In this regard, the president once again extended Constitution Day greetings to the Belarusians and the participants of the meeting.

“With the basic law, we have passed the way of the formation of the first sovereign state on our land. The Constitution adopted 27 years ago has become a symbol of a new era, which is a free, peaceful, stable life of the Belarusian people,” said the head of state.

All these years the Belarusian state has been developing following the principles laid down in the Constitution, the president said. “We have achieved a lot, and life has often proved the rightness of the chosen path. Peace and order in our country, social harmony, which have been preserved despite numerous attempts of external forces to bring discord into our common home, have become the main indicators. Last year's events demonstrated the system's sustainability. This is nothing but the firmness of the stance and principles of the people who care about their country, people who have saved the country,” stressed Aleksandr Lukashenko.

The head of state said that the Constitution is certainly a very important document for the country. However, it is not just norms written down on paper, but also the position of the people who shape the public opinion which is important.