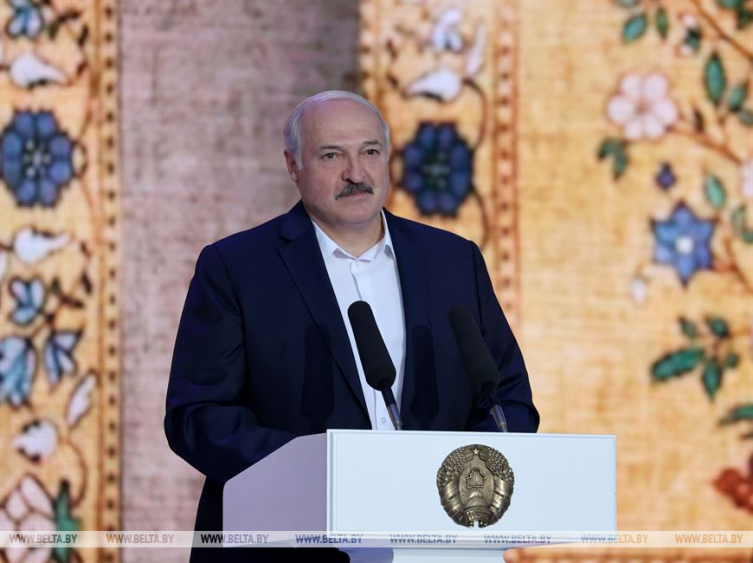 “Today we have gathered here again, in one of the most picturesque places of Belarus. We got together to preserve the spirit of the ancient holiday that has always been our national asset,” the president said.

“Wherever we live - in a small village or a big city – on the night of Ivan Kupala we flock to places where Kupala bonfires burn, wreaths of meadow grasses and flowers float on rivers and lakes, favorite melodies and songs play. We rush there, to our roots, where it all began, because everyone feels an inexplicable desire to get closer to nature: to breathe the scent of the forest, warm up by the fire and see the most important thing - the clear night sky,” Aleksandr Lukashenko said.

According to him, it is important that this festival in Alexandria is not only about the joy of getting together with family, loved ones and friends. For a moment this festival takes us many centuries back, gives a glimpse at ancient knowledge, the experience of all generations and humankind in general, reminds people that they belong here, the land of mighty tribes of the East Slavs.

“The traditions that these glorious, wise and strong people shaped a thousand years ago actually became part of our culture, laid the basis of the modern way of life. They have everything that unites us, Belarusians, as a nation today. This is sacred knowledge about forces of nature, medicinal herbs and amulets. Knowledge that teaches us to love nature, appreciate its gifts and preserve beauty. This is the connection between pagan rituals and Christian symbols, which became the basis of religious tolerance. These are the origins of our devotion to traditional values, the main ones of which are family, care for children, and respect for older generations. This is where our character, our habits and our traditions come from - from there, from a millennium ago,” the Belarusian leader said.