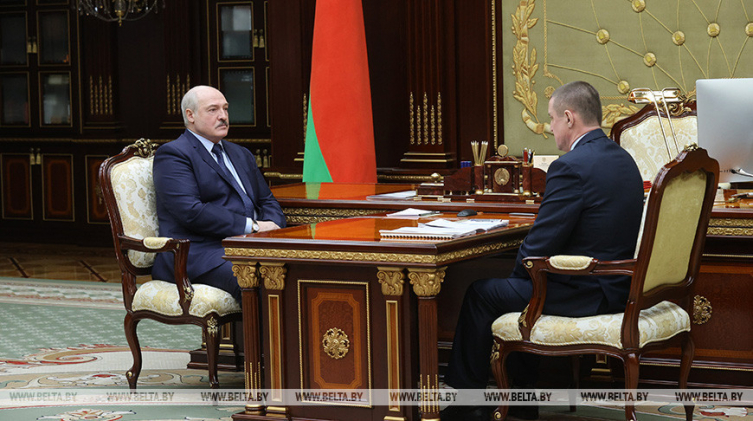 “When you were appointed to this position we agreed that the main task for the Mogilev Oblast governor is to advance the region to a certain level. As I said then, Mogilev Oblast should not lag behind,” Aleksandr Lukashenko said.

According to the president, although the region's performance cannot be called impressive, it is still quite good.

“Your gross regional product rose by about 1% [in 2020 over 2019]. Not a bad result, I should admit. However, all other performance figures leave much to be desired. Therefore, it would be wrong to see only the positive and ignore the things where you underperformed. In this case we will simply come to a halt. Let's not use the last year as a benchmark (the whole world agrees that this year should not be a reference point). Let's look into the future. However, there is no denying that you managed to galvanize local residents,” the head of state said.

Aleksandr Lukashenko recalled that many decisions regarding Mogilev Oblast development were taken at the highest level. Projects to promote the local manufacturing industry were developed, preferences to the southeastern areas of the region were provided, and support to social projects was extended. “The decisions were taken at the top level, but we must focus on their implementation,” the president stressed.

He asked Leonid Zayats what else needs to be done to boost the development of Mogilev Oblast. The head of state emphasized that this year is not like any other years. “There are no certainties: we do not know how the global economy will develop (a sharp decline is looming), how the pandemic will evolve (which affects not only the minds of people, but also the economy), how global processes will go - you see this turbulence even in the stronghold of democracy. Thus, there are many uncertainties, and all this must be taken into account, including limited resources and a certain pressure from all sides: both from within and from without. Of course, we will not drop to our knees (this is for sure), but we must keep all this in mind in our development plans. We should mobilize everything we have and then take on something new. We will proceed from this,” Aleksandr Lukashenko said.

Leonid Zayats said that 188 instructions of the president are on the radar of the Mogilev Regional Executive Committee. Their implementation was discussed at the meeting with the head of state.

“In 2020 the gross regional product of Mogilev Oblast went up by 0.9%. In this regard Mogilev Oblast did better than all other regions of the country,” the governor told reporters.

At the same time, agricultural output by all types of agricultural producers increased by 5.5% compared to 2019, the output of agricultural organizations rose by 8.8%. The industrial output exceeded Br10 billion, up by 3.4%. This and other factors helped increase salaries in the region by the average of 13.2%.