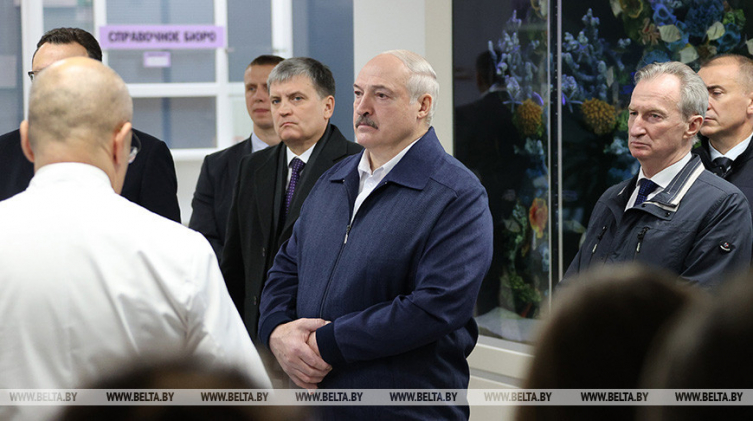 During the visit to the Alexandrov National Cancer Center of Belarus, President Aleksandr Lukashenko was told that Belarus has built an efficient cancer care delivery system, BelTA has learned.

Aleksandr Lukashenko asked how efficiently cancer services are delivered in Belarus, two decades after the country started building a cancer care delivery system with the involvement of the head of state.

The president was informed that Belarus managed not only to retain the existing system, but also to expand the cancer care delivery system. The system created in Belarus is in many respects unique and is of great interest for foreign healthcare professionals.

“We can be a role model for many countries in providing cancer care,” Sergei Polyakov, director of the center, noted.

“The system is up and running. This is important for me,” Aleksandr Lukashenko stressed.

It was noted that primary care visits declined amidst the pandemic, which affected cancer diagnosis rates. However, this is a global trend.

In general, the quality of cancer care in Belarus is among the best in the world across a number of parameters. New technologies and protocols are introduced, which helps significantly increase cancer survival rates and improve the quality of life.

The export of services – provision of cancer care to foreign patients – was also discussed. Cancer services are quite in demand among foreign nationals in Belarus.

In this regard, Aleksandr Lukashenko noted that cancer services of the same quality are much more expensive in the West. “They charge you for every this and that, they rip you off. We do these surgeries no worse than they do,” he said.

The president also wondered what is the likelihood of developing some kind of universal cure for cancer. Sergei Polyakov noted that there are already effective drugs to treat some types of cancer that can prolong lives of even advanced cancer patients for another 5-7 years and help them retain a good quality of life. However, there is no universal cure.

Yet, Presidential Aide Aleksandr Kosinets is confident that such medicines might emerge in the future and the work on them is underway in the world.

The president also touched upon the topic of vaccines, including COVID-19 vaccines, the politicization of this issue in the world, and attempts to make big money on this problem. “Healthcare should be an absolutely international domain. You cannot take advantage of people's health [to make money], the president emphasized.

Speaking about cancer, Aleksandr Lukashenko expressed confidence that Belarusian scientists have the potential to make a breakthrough, which will be appreciated all over the world.