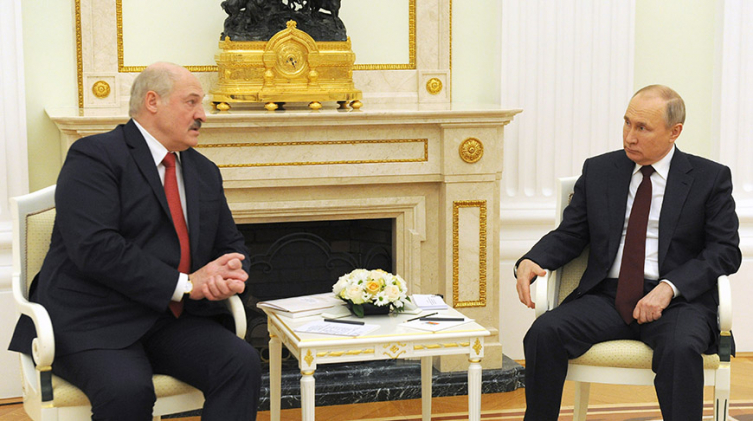 Belarus and Russia have made substantial progress in reconciling the Union State programs, Belarus President Aleksandr Lukashenko said as he met with his Russian counterpart Vladimir Putin in the Kremlin on 22 April, BelTA has learned.

“We are making good progress on our Union State programs. Remember, we started from maps [road maps]. Very important programs. Probably, 26 or 27 programs have already been reconciled at the government level. There is not much left - two or three key programs related to economy, including taxes; it is a well-known program, the decision on which was taken in Minsk,” the president said. “So, I agree with you. We are making progress little by little. But there are hot-button topics, on which we have to work harder, including security and defense of our Union State of Belarus and Russia. Although generally speaking, we've been managing and will manage. But we will draw the lines that no one is allowed to cross and we will give a proper answer to those, who don't understand that one has to be calmer and be friendly in this crazy world.”

Aleksandr Lukashenko reminded that the heads of state put together an action program in late 2020. The presidents of Belarus and Russia have met twice in Sochi recently to discuss various routine matters and strategic ones.

“The last time we agreed that our governments will work seriously in Minsk. I thank you, [Prime Minister of Russia] Mikhail Vladimirovich [Mishustin, who recently led a Russian delegation to Belarus]. He came and spoke like an academician. Well done. It was a very powerful presentation. He talked about economy, finance, taxation, tax administration, about the effectiveness of the taxation system. I will say later, we came to a certain joint conclusion,” Aleksandr Lukashenko said.

“You and I agreed that after these matters are reviewed, we will meet once again and discuss these matters,” the Belarus president added.

Aleksandr Lukashenko also remarked that a Forum of Regions of Belarus and Russia will take place in summer. It will be held in Moscow Oblast this year. “And then we will decide on an autumn session of the Supreme State Council, during which we will be able to formalize all our agreements by signing certain documents,” the Belarusian leader stated.