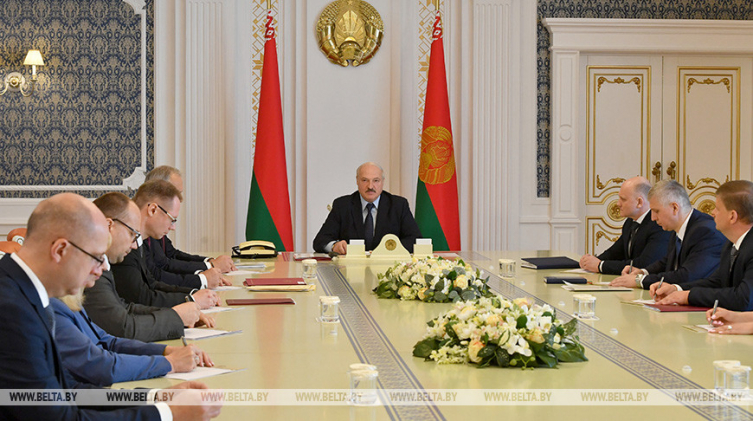 The current difficulties are solvable but we need to aim for the global average economic growth rate in 2021, Belarus President Aleksandr Lukashenko said as he met with the National Bank top executives on 20 July, BelTA has learned.

Aleksandr Lukashenko noted that the new government has been instructed to not just prevent the economy contraction this year. “We need to find and seize every chance, every opportunity to move forward. I also expect more active engagement of the National Bank in this process. This is not a dream. We just cannot go downhill because it will be very hard to move up from there. We must hold our ground despite all the problems this year,” the head of state noted.

He recalled that at the meeting on 19 June he figuratively said that Chairman of the Board of the National Bank Pavel Kallaur became an assistant to the government on wages and support of enterprises.

Aleksandr Lukashenko noted that some enterprises are really in a difficult situation, and they need support. “You know my position: those who sits idle or, God forbid, has started to cut workforce will not have the support of the state. Moreover, the measures for laying off staff will be the toughest. But those who have export contracts or who have launched an investment project should be supported. This is the refundable money," the president stressed.

The head of state asked the local authorities to join the work as they are the ones who know the situation in their regions the best. “Talk to managers and workers. Help where necessary. Do not demand too much, do not raise barriers. Meet them halfway in debt restructuring, at least as a temporary support. You know that all the countries (from the USA to China) offer such measures,” he said.

The president emphasized that over the past three months the National Bank has eased many supervising restrictions, reduced the refinancing rate. “We need to continue moving gradually in this direction. If we lose factories, companies, and workers, banks will be the next ones. We will address the current difficulties. Starting from 2021 we need to aim for the global average economic growth rate. We cannot do otherwise,” Aleksandr Lukashenko said.

“You remember that I have asked you to start a sustainable trend towards liberalization of the financial policy and stable growth of business loans. We will continue curbing the inflation rate. In the near future I will have a meeting with the government and we will review their efforts on this front. The control over pricing needs revising as prices for several goods (the media is writing about it) have almost doubled,” the head of state added.