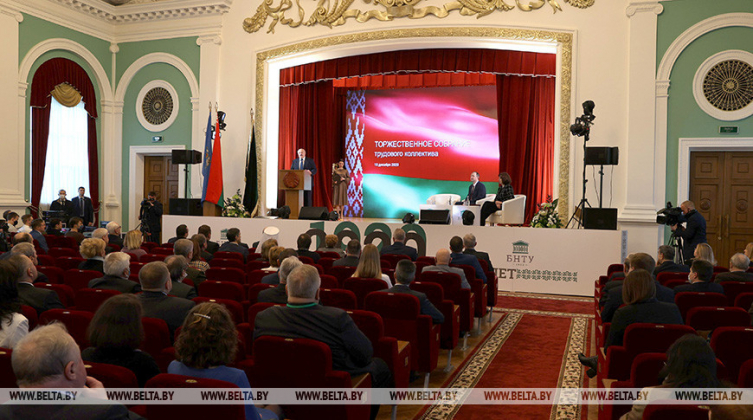 On 10 December Belarus President Aleksandr Lukashenko took part in a solemn gathering of the staff of Belarusian National Technical University on the occasion of the 100th anniversary of the university, BelTA has learned.

The visit was not in the president's schedule. However, according to the president, everyone would want to be part of the centennial celebration of the country's leading engineering university.

He noted that Belarusian National Technical University was the birthplace of the country's engineering science and creative work. “This event is a tribute not only and not so much to those who established this university, as to those who brought fame to it with their achievements,” Aleksandr Lukashenko added.

Samples of Belarusian automotive equipment developed by the university's graduates were put on display in the courtyard of the main building of the university. According to the president, Belarusian engineers can work wonders, however, they face a fierce global competition. “Everything that we have seen here is produced in huge amounts in the world. The fact that you have withstood this competition and manufacture products that are on demand in the global market is worth a lot,” the head of state stressed.

He added that he always treated the university's graduates with great respect. “I have always compared the actions of certain students, graduates, and so on: you have always been the pillar and foundation of our statehood,” the Belarusian leader said.

A day before, Aleksandr Lukashenko signed a decree on awarding Belarusian National Technical University with the Order of Labor Glory. The educational institution was honored with the award in recognition of its considerable contribution to the development of engineering education, scientific research in the energy sector, machine-building, construction and architecture, advanced technologies, training of highly qualified specialists and on the occasion of the 100th anniversary of the university.

Earlier, on 7 December the president signed a decree to allow awarding organizations and their teams as well as military units with state awards.