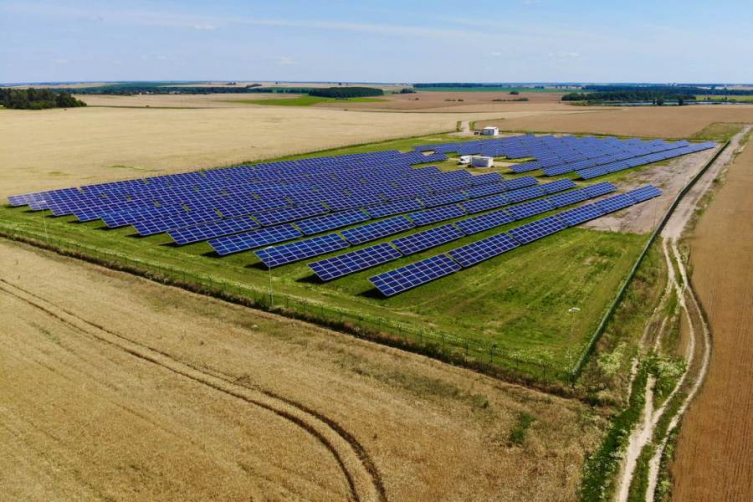 A complex of solar panels the size of five football fields is located in the village of Kachanovichi on the site of the former agricultural aviation airfield. The station has already begun to accumulate energy for the needs of the district and region, according to MLYN.BY.

Nesvizh region is mostly agricultural. Powerful grain drying complexes, especially during the harvesting campaign, and industrial enterprises have a need for a certain amount of electricity. Therefore, about a year ago, it was decided to build a solar energy plant. The customer was the local company "REAG-Nesvizh", Swiss and German investors became interested in the project. And it started spinning.

For six months, on a plot of about 5 hectares (which is important, arable land was not used), 4,752 photovoltaic modules appeared: the cost of one is about 130 euros, the power is 335 watts. The complex began producing the first energy on June 23.

- The whole installation is based on the energy of the sun. The more solar radiation - and it is the highest from March to May, as well as from August to October - the more energy, - explains the technical delays REAG-Nesvizh director Nikolay Murashko, who has devoted almost his entire life to working with renewable energy sources. - The panels are polycrystalline, they "catch" this radiation and supply them to the inventors, which convert alternating voltage into direct voltage. Then the energy “flies away” to the electrical substation and enters the general power grid.

The capacity of the complex is 1.6 megawatts per hour. This is enough to provide a thousand residential buildings with "clean" energy. At night, the station "sleeps", and with the first rays of the sun "wakes up" - it works fully in automatic mode. If the weather is cloudy outside, the power drops slightly - 1.3-1.4 megawatts.

There is only one employee in the solar park - the station operator. It monitors the work of 22 inventors through a monitor. In real time, it shows at what power the profitability becomes higher.

- The cost of this project is almost 3.5 million rubles, it will pay off in 11 years, - Nikolai Murashko comments and offers to look at the screen. - For example, with a current capacity of 1.267 megawatts per hour, the income is 11.47 thousand euros per day.

However, in the near future one cannot count on “green” energy in Belarus, Nikolai Nikolaevich argues. In connection with the introduction of the BelNPP, quotas for the construction of renewable energy sources will be several times lower.

- There should be room for everyone in the power system. After all, solar panels, biogas plants, wind turbines are not only a solution to economic, but also environmental problems, - the director of REAG-Nesvizh is sure. - Such complexes can reduce harmful emissions into the atmosphere. In Kachanovichi we have built the first solar battery park in the Nesvizh district. Similar installations began to be erected in the Senno district of the Vitebsk region and the Mstislavsky district of the Mogilev region. There are plans to install small photovoltaic stations at the landfills of solid waste "Severny" and "Trostenets" near Minsk. The project is already being done.

Several sources of renewable energy have been built in the Nesvizh district. Biogas complexes, which generate energy for their own needs, are installed in the Snov agricultural complex (capacity - 2.9 megawatts per hour), as well as in Lan-Nesvizh farm (1.4 megawatts). In the agro-industrial complex "Nesvizhsky" "green" energy is generated by a wind generator.