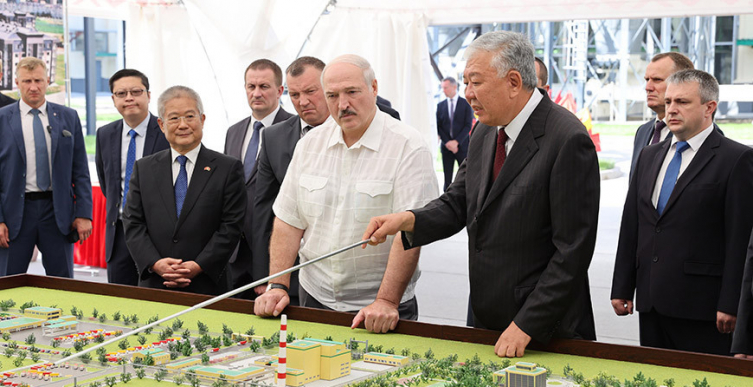 The President of Belarus visited a large complex for the production of high-quality feed, amino acids and premixes of the Belarusian national biological Corporation (BNBC) in Pukhovichi region, BelTA reports.

The head of state was informed in detail about the implementation of the investment project, the work that is currently underway and planned for the future. Special attention is being paid to the issues of purchasing and logistics of grain supplies from Belarusian producers to BNBC enterprises. It is planned that 700 thousand tons of grain will be processed here per year, and the first deliveries will be made literally in the next few days.

It is expected that modern agricultural production will produce commodity products worth $650 million per year, and receive $ 300-350 million in net profit per year.

The NBK expects that with the commissioning of the main facilities of the investment project, they will initiate the organization of an agricultural holding in Minsk Oblast, similar to how it was done in the Vitebsk region.

Separately, we discussed the social protection of employees. Their number after the full launch of the investment project will be about 2.1 thousand people. The average salary for employees already reaches Br1 thousand. To attract specialists, several residential buildings have already been built in the village of Druzhny, there will be 24 of them in total, while employees can expect to purchase rental housing at cost after 10 years of work at BNBC enterprises. As it was reported to the President, housing was built at a cost of $632 per 1 sq. m. Alexander Lukashenko instructed to focus on this price when building housing in Minsk.

The investment project is implemented by Belarusian National Biotechnological Corporation. During the period 2016-2032, it is planned to organize the production of deep processing of grain using modern methods of biotechnology with the production of essential amino acids for the production and access to the local and export markets of highly productive, balanced feed and premixes. Construction of objects under the investment project began in March 2019. At present, General construction works on agro-industrial production facilities are being completed, and the installation of technological equipment is actively underway. Construction works on amino acid production facilities are in an active phase, and technological equipment is being installed in parallel. The launch of biotechnological plants is planned at the end of the first half of 2021.

Now BNBC is actively searching for and training personnel to work in production, as well as actively working to conclude contracts for the supply of raw materials and search for potential buyers of products.