Minsk Oblast Executive Committee, together with a Chinese corporation, will build a surgical building and an infectious diseases hospital 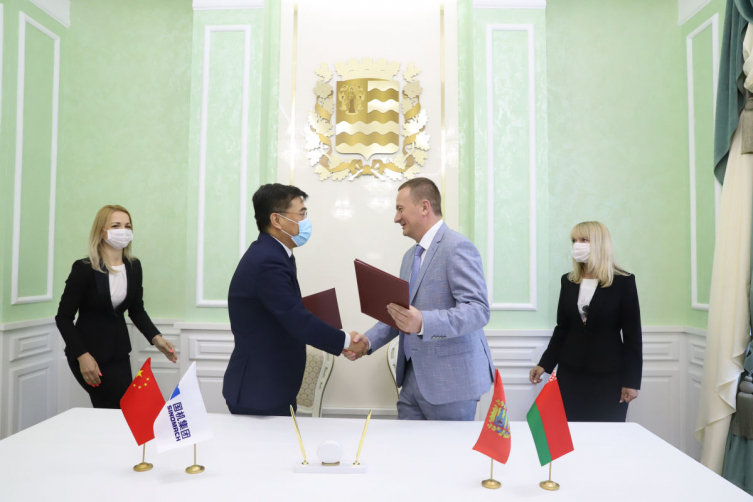 While Europe is introducing new sanctions against Belarus, China is signing another agreement with our country. The signatures in the memorandum of cooperation were put by the chairman of the Minsk regional executive committee Alexander Turchin and the vice-president of the open joint-stock company "China Engineering Corporation SAMS" Mr. Li Haixin.

The parties expressed their readiness to cooperate in the field of healthcare, including a project for the construction of an infectious diseases hospital, a surgical building, as well as in the field of waste processing, export-import trade of agricultural products, and the creation of a plant for the production of baby food.

As Aleksandr Turchin explained, the friendship between the company and Minsk Regional Executive Committee has been established long ago and is only getting stronger every year.

— We have known Mr. Li Haixin for almost ten years. I am very glad that at this difficult, quarantine time, he arrived in our country. We agreed to sign a memorandum in a few days. We can say that it was an impromptu, which my colleagues and I have implemented in such a short time. We have a lot of directions, but we have identified priorities for ourselves at the initial stage. This is, in particular, the healthcare sector, because our Chinese colleagues have extensive experience in the construction of healthcare facilities. In the Minsk region, two important facilities are needed: a surgical building in the regional hospital and a modern infectious diseases hospital in the region. Perhaps it will be located on the territory of Borisov, - said the chairman of Minsk Oblast Executive Committee.

Also, according to the head of the region, the corporation has a wealth of experience in construction and financing projects related to waste processing. According to Alexander Turchin, this direction is relevant for Belarus. The amount of waste increases every year, so it is very important to implement the planned projects.

- Trade cooperation is no less important, which in the future, I am sure, will develop into investment cooperation. These are the supplies of our agricultural products to the PRC. We would be interested in a project to create a baby food plant with supplies to the PRC, - said Alexander Turchin.

In turn, the vice-president of the open joint-stock company "China Engineering Corporation SAMS" Mr. Li Haixin noted that the Minsk Oblast Executive Committee and the company are expanding the spheres of their interaction. The corporation specializes in technical industries, construction projects, trade, investments.

— I hope that our cooperation will help improve the life of the two countries, strengthen the friendship of peoples and contribute to the development of the Minsk region. And although we already have a good basis for cooperation, I would like to express my gratitude to the entire Belarusian people and personally to Alexander Turchin. I hope that we will have more prospects for cooperation, and we will contribute to the development of trade and economic cooperation between China and Belarus.